February 12, 2020
2020-02-28 -- Update: China continues to maintain control of the outbreak. No new deaths were reported in China today and only eight new cases. Unfortunately, at least some countries appear unable to cope with the outbreak. If the numbers increase as they have for the top six growing fastest, cases could number in the millions by the end of March. The World Health Organization have increased the risk assessment of the coronavirus to 'very high' globally.

2020-02-24 -- Update: Data is still a bit murky, so it is hard to rely on the accuracy of predicted numbers. It is not possible to assign reliable error bars. However, the fact that the spread is slowing is clearly there in the data and it is unlikely in the extreme that misreporting would look like that. Here is a graph from the World Health Organization.  It is pretty obvious that the big spike there is out of whack. That is an artifact from one example of Chinese misreporting. Despite the clear problem there, the shape of the graph is unmistakable. It was getting worse and then it started getting better. If the Chinese had been more forthcoming in reporting accurate numbers, someone like me could predict with greater precision how things would unfold. You can also see, though, the projections based on their numbers were less accurate than they should have been. Had we better numbers we would be much better able to say what the rate of spreading was and what the expected mortality rate would be. I estimated 2% morbidity for my analysis, which was more accurate than I might have expected. It appears to be in that ballpark, but the exact figures for how it spreads and what percentage of people die may be impossible to determine from the data we (I, anyway) currently have. 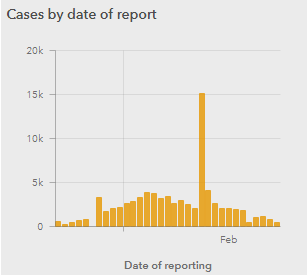 2020-02-21 -- Update: China continues to fudge numbers making analysis pointlessly difficult. However, China does appear to have gotten the epidemic under control. Confirmed cases are at much less than half the number projected originally (77,798 actual vs 189,607) and only slightly more than half the last projection (77,798 actual vs 143,781). Unfortunately, it seems as if other jurisdictions are not bearing down hard like the Chinese. Numbers are small now, but could get totally out of control in ten weeks or less. Other jurisdictions do not have nearly the social control China does. Once things go beyond a certain point, they may not be controllable by any means. You would think that given the clear evidence that

this is deadly and difficult to contain that countries would not be so sloppy about containment efforts.
2020-02-12 -- Update: China suddenly spiked the numbers up by changing the way they report them. Even so, the numbers are below those projected and thus far seem on track to stop their rapid increase. I updated the curves to more closely match what was reported with a shallower curve. That will report even lower numbers than originally, but the reported numbers are still lower than projected. This indicates to me that at least in China the worst is likely over. It is still too early to tell if the rest of the world has taken the lesson and been similarly effective in containment, but if I had to call it, I would say they likely have.

The curves are based on a doubling of cases in about eight days, with patient zero identified November 1 and a death rate of two percent of confirmed cases. The death rate is sure to be an underestimate going forward. This is a crude analysis, but currently the data does not seem reliable enough for a more sophisticated analysis to provide significantly better confidence. If I have the time and things still look dire a week from now I will attempt to do a more robust analysis. 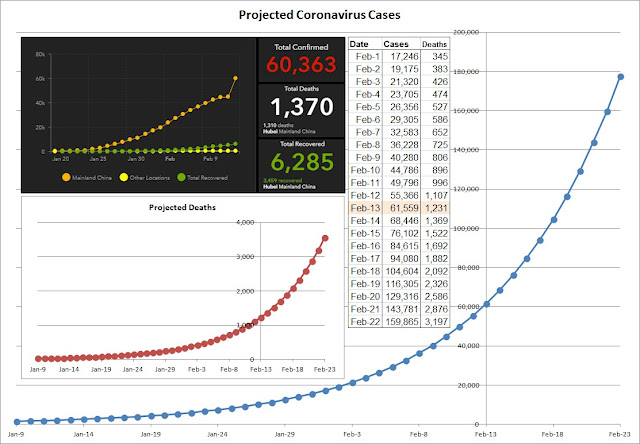 As of this writing (2020-02-12), it would appear that the Coronavirus outbreak has finally been brought under control in China. 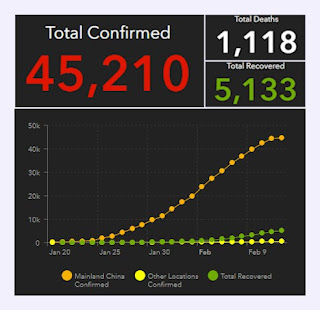 There are some large caveats here, but it still looks good right now. The biggest caveat is that the data that is available is missing crucial bits because reporting was initially suppressed and then misreported before (what looks like) reliable figures started coming.

If the rest of the world clamps down as it appears to have done, the outbreak should be over and with luck the virus itself will not end up taking permanent hold.

The table below (a projection created at the end of January) is roughly consistent with the numbers reported up until the 9th or 10th this month. As of the 10th, the growth in cases began to stall. The deaths were still consistent as would be expected because deaths lag behind reported cases. As of this writing, though, even the deaths are lower which would indicate to me that at least in China the outbreak has been sharply contained. 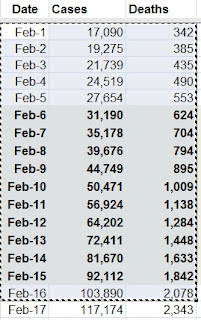