It kills me how people reporting in finance will sagely advise, either vaguely enough to be meaningless, or just incorrectly. Jim Cramer was infamous at one point for loudly hollering advice slightly worse than a coin toss. If you want good investment advice, listen to "the sage of omaha" here: BERKSHIRE HATHAWAY INC. SHAREHOLDER LETTERS

The text below is from a comment I made on disqus here:

At the end of this analysis, I feel like trading is like a social game akin to discussing astrology. To me, the narrative looks like this:

If those various technical indications had predictive merit, somebody like me would have already incorporated them into trading software, thus nullifying the effect. The house always wins because over the long haul, a tiny percentage advantage becomes impossible to fight. In this case, I expect the house also always wins because it sees trades before they happen, and it manipulates outcomes. The GameStop situation gave a good indication that the game is rigged. A concerted effort by the little guys set back the short sellers on the house side, so they quickly shut the game down.

Mercifully, I paid nothing for my tiny bit of bitcoin. I have held it for more than a decade. Recent drops in price don't make any difference to me. I break even at $0 per coin :). The price probably won't make much difference to me in terms of selling. I will sell on a whim or if I need the money for some reason.

Over the long haul, I predict that bitcoin will continue its inexorable rise in value. Why? Because it is worth money, is permanently scarce, and although trading is clumsy and difficult now, it still allows the transfer of enormous sums quickly that are difficult to interfere with. Those suckers cost something like about $10K to mine. I expect that is a bit of a hard floor because they will surely cost more than that to miners going forward. They become ever dearer per coin to mine. In a sort of 'worst case' scenario, activity goes way down. If that happens, bitcoin will be the best of all possible worlds for people with means. The system will have all of its other advantages and become (again) faster and easier to use.

As can be seen from the pricing, bitcoin is the 'gold' of crypto-currencies. It is intrinsically scarce, and intrinsically expensive to mine. Let's face it, if BTC crashed to $10 per coin, any sane investor would be buying on the chance, however small, that it rose again.

Because of inherent deficiencies in its design, BTC will not become the crypto-currency people use for ordinary transactions. In my opinion, that has yet to appear, but it is only a matter of time. If it were me (could be), I would design a system with the scalability to transact micropayments in the trillions of transactions per second, backed with real assets, to create a hard floor, and correct other deficiencies which are difficult, but in my opinion not impossible, to correct. I'm sure about a lot of things, but still on the fence as to inflatability. My instinct is that inflation has to be built in, and variably responsive to circumstance to balance value, liquidity, and utility, but I as yet have no way to quantify what that should be.

If we discovered pits of gold in various parts of the world whose volume was hundreds of meters on a side, the price of gold would drop to the value of its utility other than as a store of value. Nothing is immune to loss of value.

Bottom line, short term it's anybody's guess what happens next, long term it's most likely it rises yet again to reach a new high.

I made a similar post about the Facebook market cap, and I did it for the same reason, essentially an argument from boundaries created by the math. In 2012, I predicted Facebook would hit a trillion dollar market cap. In 2017, I did the math on the data to that point and extrapolated forward to when it would hit that mark. Here's the graph I published in 2017: 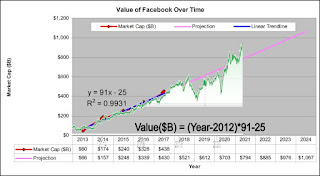 Of course, I could be wrong. Prediction is hard, especially about the future :)