2020-03-31 -- Update: Have created a variety of graphs showing what I expect the spread of the virus in the coming month to look like. It does not look good. Thus far, we are on pretty much a 'worst case' trajectory. Recent news of people ignoring advice to stay home is discouraging. Unfortunately, this thing spreads so quickly that by the time things get bad enough for people to take decisive action it will be too late. 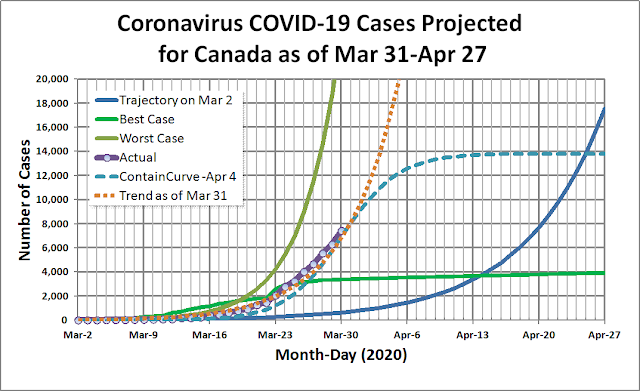 2020-03-08 -- Update: Canada is currently on the same trajectory as countries where the Coronavirus got out of control. Unfortunately, global containment measures have not been aggressive enough and a pandemic now seems certain. In Canada, with aggressive measures following the example set by China, we could contain this until better treatments are available and ultimately there is a vaccine. As of this writing, these measures are not being taken here in Canada. It is likely we will have to take aggressive measures anyway, we should be doing it sooner rather than later. 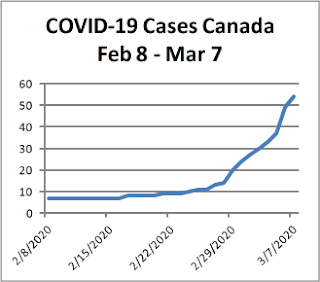 
The current case looks better than the 'Best Case' initially. We have a shallower growth rate than China reported based on the one day today, but that is inconsistent with how this has generally spread. We don't appear to be moving yet to properly contain and I find it doubtful that we can move any more quickly and surely than to keep it to the 'best case' numbers in the next six weeks or so.

We need real leaders in power rather than poll-following ... uh ... followers. The Coronavirus outbreak caught my attention back when there were only a couple thousand cases reported in China. The reason I kept looking is because it was fatal, I could see that the rate at which it was spreading was very rapid and, at the time it was out of control. Most countries have seemed to take a 'wait and see' attitude until they lose control. Canada and the States still have a chance to contain, but the window is already closing and last I heard we/they are not taking the strict measures that containment requires. That means likely many thousands of deaths, possibly more and potentially massive disruption as everything is finally locked down. At the rate of increase Canada is reporting right now, we could be worse than China, with 100K cases and 3K deaths, within ten weeks. Worst case we could see more than a million cases and tens of thousands of deaths in less than six weeks. Given how slow we/they have been to act thus far, I think it is time to get on top of this.

2020-03-02 -- Update: Cases now exceed 90K and more than 3K have died. In case somebody who is managing this, or something like this, is reading: One of the very worst problems about this outbreak is the lack of reliable information. People on the ground have to understand how important accurate, timely and available information is. From the moment something like this is identified at all, every healthcare person should be following a similar protocol to record as much of the information as they can about: presentment, symptoms, exposure, location, onset, diagnosis and the timing of each thing. Some are exposed, some of those exposed contract, some who contract are diagnosed, some recover, some diagnosed become critical, some critical die. Without exact information, particularly timing on these events, it becomes very difficult to understand, predict and control -- as we have seen. Information that is being closely held by small clusters of entities is useless to anyone else. It should be flowing in real time to a central repository openly available to all.


2020-03-01 -- Update: Figures from China still indicate that they have it under control. However, other countries have failed to take necessary measures quickly and completely enough. The virus is spreading rapidly in Iran, Italy and South Korea. They simply do not have it under control. It is disturbing that countries like Canada are waiting so long to lock things down. This outbreak appears to be extremely difficult to contain and authorities everywhere seem unwilling to act until it is too late. 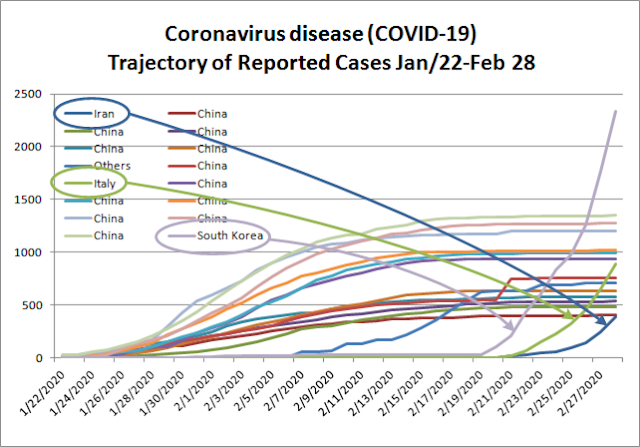 2020-02-29 -- Update: Reporting from China is still problematic. It appears that they are maintaining control, but the latest numbers are not consistent with accurate reporting. Since yesterday, reported daily new cases jumped from 8 to 403 and new deaths jumped from zero to 47. That is consistent with inaccurate data collection and/or reporting rather than an accurate change.

South Korea and Iran currently do not have control with new cases jumping to 26%of the total and 35% of the total respectively. Iran is reporting 21% new deaths bringing current (reported) mortality rate to 7%.

There is no cause for panic. Deaths due to Flu greatly outnumber current coronavirus deaths. However, there is cause for concern. We are still dealing with an unknown, but we know it has the potential to be bad. So far, it appears that incubation periods can be long -- as long as 14 days, perhaps more. During that time, infected people are contagious, they spread the disease and it does not require direct contact. That makes it difficult to contain.

So far, it would appear that at least 1 in 50 infected people die. If the person has risk factors, that number climbs to as high as 1 in 10. That last is literally like playing russian roulette with a 10 round magazine.

China's initial response to the outbreak was confused and ineffective. That led to a dramatic rise in the number of cases. They had trouble bringing it under control, despite having and ultimately using significant power to quarantine and to treat. China currently has 780 million people under travel restrictions -- ten percent of the world's population.

It is worrisome that the rest of the world seems to be recapitulating China's original trajectory. Unlike China, countries in the Western World have much less control over their populations. We know that this infection can travel and increase quickly and we know that at least to some extent it is currently fatal.

Before getting it under control, China